“The Sparrow Coalition is a community partnership addressing local issues of homelessness and poverty.”

The Sparrow Coalition works to connect existing resources and community stakeholders for innovative solutions to the problems of poverty and homelessness in southern Illinois. The coalition unites social service organizations, Southern Illinois University researchers and students, civic leaders, and faith communities. An important aspect of the coalition is that those who are living in poverty or who have experienced it are members and leaders. Their lived experiences and input help shape local initiatives.

These groups are working together for compassionate and sustainable responses to the unmet needs of those on the margins. They include the homeless and those on the edges of homelessness such as parolees, veterans, the unemployed and underemployed, those with mental and physical challenges, and those struggling with substance abuse. Our goal is to address conditions that contribute to poverty and facilitate community-wide responses to its consequences. Our vision is to help people gain self-sufficiency wherever possible, and if not, to help people attain the kind of care they need to live lives of dignity.

Marleen Shepherd, Sparrow Coalition founder, invites people to get involved at one of many community events hosted by the Coalition in cooperation with the Carbondale Public Library. The Coalition works to bridge area resources and community organizations to address poverty in southern Illinois.

The Sparrow Coalition began with efforts to understand what was most needed and what would be most effective for addressing poverty in our community. Among the initial problems we identified was that where resources did exist, there were significant barriers to access. This resulted in the first partnership formed through the Sparrow Coalition between the Carbondale Public Library and the SIU School of Social Work. The library is an ideal location to reach people in need where they are. Community members who are homeless or struggling with poverty come to the library to access its resources.

Shannon Butler became the first SIU graduate student to intern at the library in September 2015, and quickly gathered a caseload of 6o clients, an indication of the growing need for such services, not only regionally but nationwide. Resources developed in this position in concert with Sparrow Coalition researchers have been shared widely so that other communities can adopt similar programs. Resources identified have also been compiled for distribution to faith communities, the city of Carbondale, and other groups who have frequent contact with those in need. The Sparrow Coalition hosts regular in-services to educate the community on available services and programs. We have been successful in helping citizens identify resources, such as rent and utility assistance, that stop the downward cycle that leads to homelessness.

Faith leaders in Carbondale, Ill., gather for a Sparrow Coalition in-service to learn about community resources that break the cycle of poverty.

Through continuing partnerships with SIU, students are placed in the community where they can make a difference for people in need while fulfilling educational requirements. In fall 2015, a service-learning project under the direction of Sparrow Coalition Co-Founder Dr. Dona Reese gathered statistics on regional homelessness. You can see the students’ presentation here. A spring 2016 class researched policy changes that could better help those in need, and their findings helped to shape recommendations that are strengthening existing social services and community response. 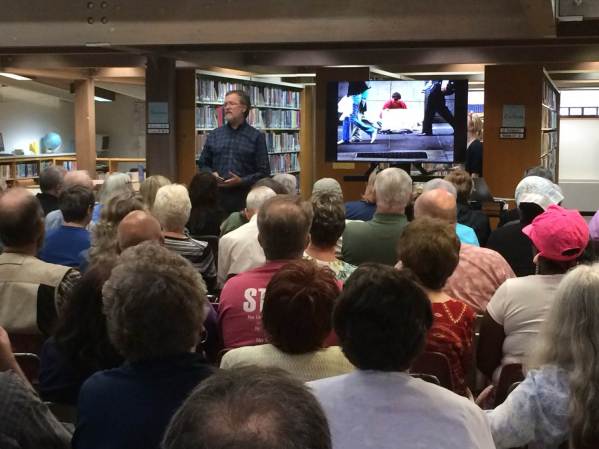 The Rev. Dan Bryant, co-founder of Opportunity Village in Eugene, Ore., discusses his community’s successful initiatives to alleviate homelessness at a community forum on poverty at the Carbondale Public Library.

A History of the Sparrow Coalition

The idea for the Sparrow Coalition came from the concern of faith communities about growing poverty in the community. Requests for social services in the region have increased by double digit percentages since the economic downturn of 2008. Area food pantries and homeless shelters have been unable to keep up with the demand.

While more people are in need, social service providers have received decreased funding from the government and from private donors who have less to give. The situation became desperate during Illinois’ historic two-year budget impasse, which began July 2015. Social service agencies were among those entities most greatly affected. This resulted in staff layoffs, the cutting of programs that help the poor, and statewide closures of domestic violence centers, homeless shelters, and community programs such as Meals on Wheels. It is estimated that it will take a decade or more for the social services infrastructure in Southern Illinois to recover.

Additionally, many of those on the margins are not able to be helped by existing social services due to complex barriers. Faith communities recognized that they did not have the resources to adequately address the problem alone.

The development of Sparrow Coalition started as a seminary project of Marleen Shepherd, who represents First Christian Church (Disciples of Christ) on the Carbondale Interfaith Council. Shepherd worked with the interfaith council to begin building relationships among those living in poverty, social service providers, citizens, charitable organizations, civic leaders, police, the business community, and the university – all of whom deal with the effects of poverty in our community. While Carbondale is facing serious challenges, it also has many resources. Students and researchers at Southern Illinois University are among the coalition members who are gathering data on poverty and helping to identify solutions that are working in other communities. Carbondale citizens are also actively engaged in numerous community organizations and efforts. The coalition brings these groups together so that knowledge and resources can be shared.

The Sparrow Coalition began by simply making connections and having conversations. In February 2015, the Carbondale Interfaith Council hosted a visioning meeting for the development of the Coalition. Strategic planners from the social service agency Centerstone donated their time to help the coalition determine how the community could better help people in need and those who help them.

Out of that event, teams were formed to pursue specific actions. Teams have since generated reports on met and unmet needs in the region; testified before the Illinois Senate Health and Human Services Committee on the regional impact of the budget impasse; and initiated research on programming, infrastructure, and funding possibilities. We continue building relationships among institutions, organizations, and marginalized groups; and hold several educational events on poverty and homelessness in our region.

The Sparrow Coalition is continuing to research long-term solutions while implementing immediate actions to better help people in need, and better support those who are already helping them. Currently teams are working on Emergency Shelter, Long-Term Housing, Advocacy, & Education. You can learn more about Sparrow Coalition Teams here. To get involved with the Sparrow Coalition or to be added to our email contact list, please contact us at info@sparrowcoalition.org.

We welcome all individuals and groups who are interested in working to address poverty in Carbondale to join us in seeking sustainable and compassionate solutions. If you would like to get involved, contact us at info@sparrowcoalition.org or call (314) 669-1577.

For information on attending Sparrow Coalition general meetings, or to be added to our email newsletter, contact us at info@sparrowcoalition.org.