Dan Bryant of SquareOne Villages (SOV) described low-cost methods used to provide temporary shelter for the homeless in Eugene, Oregon at the September Community Forum. Through these innovative approaches, nearly 200 people have found shelter without the construction of a traditional shelter. In addition, Bryant also discussed the next project, permanent housing for the homeless using micro-housing concepts. Bryant has a mission to create self-managed communities of low-cost tiny houses for people in need of housing.

Dan began by giving statistics of a homelessness study that showed it actually cost less to house the homeless than to deal with the ramifications of the homeless being unsheltered and “on the streets.” He also said that the federal agency, Housing & Urban Development (HUD), is pressuring communities to house the homeless. Tent cities in many communities have not been an effective option, and these homeless are often forced to move frequently. Thus the homeless in our society are often the poorest of the poor and cannot live with the dignity they deserve.

Dan’s presentation centered on six ways to deal with homeless, five ways as has been done in Eugene, Oregon, and the sixth that is in the planning process and will be done. For further information, go to: http://www.squareonevillages.org

Six Methods of Sheltering the Homeless in Eugene, Oregon: 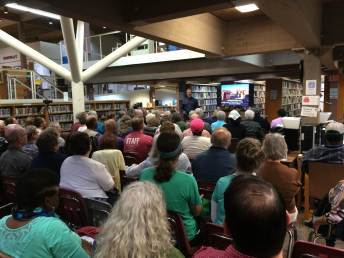 This is similar to the one in Carbondale, in that the shelter has a zero tolerance for drugs or alcohol so as to protect the families with children. However, in Eugene, the largest shelter provides 450 beds.

Homeless who do have vehicles or trailers are allowed to park in a designated areas. Several communities had had incidences of violence in these settings, especially when allowing many vehicles. Currently in Eugene, anyone with a parking lot can provide for 3 – 6 vehicles as long as a Porta Potty and trash services are made available per city regulations and sometimes outdoor cooking arrangements. Most of these lots do not provide electricity for the vehicles, but Dan’s church does. They call this, “The 3 Trailer Ministry” because some of these are not motorized vehicles, but trailers that are brought or donated. All three trailers at Dan’s church were donated.

Several churches in Eugene alternate to serve as “Warming Centers” for homeless when the temperatures falls below 30 degrees Fahrenheit. Usually, 18 people are located per site with at least one trained staff available. Rules usually include that the homeless are to be alcohol and drug free.

Legalized camps can be established within the city with 20 or less homeless per site. Often these are located close to community-supported centers. Some sites have built 6 foot by 10 foot huts at a cost of about $1,200.00 each. These “Conestoga” huts have wooden floors set on concrete blacks with a U-shaped dome top stretched across Polyvinyl chloride (PCV) piping; these were in the shape of the Conestoga (covered) wagons used in the 1800’s to go West. One of these sites is a “Veterans’ Rest Site”, because it has been found that especially Post Traumatic Stress Disorder (PTSD) sufferers fare better alone in a hut versus living in a noisy community shelter situation. One rest stop is a “wet shelter” for those with addictions.

This gated community has mostly “tiny houses” being 8′ by 8′ wood units each with a loft for sleeping and 2 chairs and a desk/table. Also some of the units are the Conestogas on the concrete blocks, as described in (4) above. These units usually do not have electricity or water but surround a community center that has electricity, water, restrooms, showers, a cafeteria area, and laundry room, a community garden and has access to public transportation. To look for work, these residents need showers, laundry and cafeteria facilities, phone access and an address, as well as access to public transportation. The goal is for these residents to be able to eventually transition out of this village to their own apartments and about 70% have done this so far. But for HUD housing in Eugene, the wait time can be about one year for a 2-bedroom apartment for a family and over 5 years for a one bedroom apartment for a single or couple. HUD housing is experiencing quite a back-log due to the large number of people who have lost jobs in OR. The Eugene village has been there since 2013 and has 29 units at a total cost of $200,000. Dan had talked to a contractor from St. Louis who thought that the cost would be lower in Southern Illinois. The cost per night is $3.00 with the homeless paying $1.00/night of this.

This is in the planning phase in Eugene with three architects designing tiny, permanent houses which would range from 120 – 250 square feet each. They would contain a toilet, shower or bath, kitchenette, bed and table/chair area. The mission is to expand affordable housing options for very low-income individuals and families through low-cost, tiny houses within a stable community setting in which residents can build equity. $300,000 was paid for the total property and the individual houses will be built with volunteer labor. The residents would be members of a homeowner’s association in which they build equity. Residents can take pride in their homes and have the dignity of home ownership. Some of the residents may be getting the $730/month in disability payments (SSI) or are underemployed as working part-time.

Those interested in learning more about Housing First initiatives are encouraged to access the Informative Resources page.

We welcome all individuals and groups who are interested in working to address poverty in Carbondale to join us in seeking sustainable and compassionate solutions. If you would like to get involved, contact us at info@sparrowcoalition.org or call (314) 669-1577.

For information on attending Sparrow Coalition general meetings, or to be added to our email newsletter, contact us at info@sparrowcoalition.org.